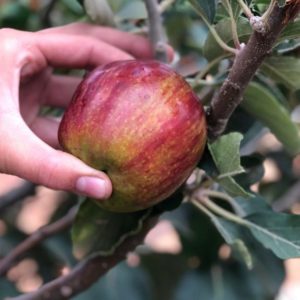 Master of the Garden

Even if the seasons are different in South Africa, the types of apples, their tastes and their stories are worth being mindful of and carefully tasting the sometimes sweet, sometimes sour and usually wonderfully juicy taste or observing the texture and shape of the fruit. Harvest time in Germany comes later, but anticipation always goes.

Thanks to patience, a little “trial and error” and a touch of mystery, Babylonstoren is now home to some historic apple varieties. Anton Roux, gardener and master pruner, has been with Babylonstoren from the beginning, helping to establish and grow the garden. With much research and grafting since 2013, Oom Anton, as he is affectionately known on the farm, has brought back these forgotten apple varieties and harvested the first handful of fruit at Babylonstoren this spring:

Isaac Newton apple (Flower of Kent).
According to history, this apple is credited with triggering Isaac Newton’s laws of universal gravitation when he saw it fall from the Flower of Kent tree. This variety was first described in 1629 and is a direct descendant of one of the most important historic trees in Britain.

Witte Wijnappel
Jan van Riebeeck planted apple seeds in the Company’s gardens at the Cape of Good Hope in December 1652. This variety was recorded in the diary of the Dutch governor at the Cape as the first apple picked in South Africa when he harvested the first two Witte Wijnappels on April 17, 1662. The Wijn apple was popular as both a food apple and a cider apple. Babylonstoren’s own Witte Wijnappel was planted in August 2019 and is a descendant of the original tree in the Netherlands.

Wemmershoek
The Wemmershoek apple is a true Cape seedling that was grown in the Wemmershoek Valley (Cape Province) in the early 1900s and was a very popular variety in South Africa. It is an extinct variety on the list of historic varieties and, like the other historic apples, is no longer produced commercially. It was first discovered as a seedling where the Wemmershoek Dam is now located, between Franschhoek and Paarl.

Dunn’s Seedling (Ohenimuri)
This cultivar originated in New Zealand, and is believed to have been imported by the noted nurseryman Mr. HEV Pickstone in the late 1800s. It was first planted on the Oak Valley Estate in Elgin in 1900. The first fruit was exported to European countries in 1929 and by the 950s Dunn’s Seedling accounted for 28% of all apples planted in South Africa.
Do you know the stories about your apples or other favorite fruit? The thought that Oom Anton inspires us all the way to Germany, to look behind a cover or to already enjoy the blossoms, definitely puts a smile on your face.